The customer needed to inspect caps/seals for the 110 mm and 160 mm Push-Fit products. Each bend, reducer, joint etc. has a “cap” that clips on with a rubber seal that seals the cap to the pipe/joint but also allows the mating tube to seal on its inner diameter. The product can be buried under a house so a long lifetime without failure is very preferable.

The inspection requirement was mainly for “short-shots” where the amount of dosed plastic/rubber is short so the mould is not fully filled and the product ends up with a gap. This “short” looks like a dent or nick out of the circular seal and would cause a leak. The plastic is black, white, brown or grey, with black rubber. As there is no contrast, the black rubber against black plastic is hard to find.

The customer’s requirements included minimum installing within the existing guarding. They already had a robot taking the parts out of the moulding machine and placing them onto a cooling conveyor – the customer wanted the vision to work while the robot holds the parts. The robot can then put them to different locations, based on whether they passed or failed. The environment is relatively open, with the robot moving over-head. 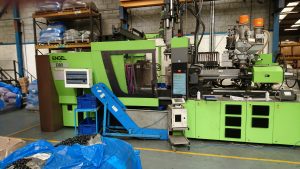 The best solution was to use 3D vision to allow us to check the relative height of the rubber against the plastic rather than to use 2D vision (mainly due to the black rubber against a black plastic background).

The customer chose the Photoneo PhoXi 3D Scanner as it was able to provide high-quality images that were significantly better than those of their competition.

Fisher Smith Ltd. use their own software/UI, GenVis, which is built on the vision library HALCON provided by MVTec. The HALCON library does a lot of background things, such as image processing algorithms, image, display and graphics, image acquisition and the ability to interface with cameras from multiple vendors. MVTec is a software company that does not make or sell cameras; it remains independent and delivers support. This allowed Fisher Smith to choose from a wide range of machine vision cameras and scanners and different brands and technologies.

It allowed the company to quickly integrate Photoneo PhoXi 3D Scanner into the GenVis software as HALCON already supported the interface. They were thus able to use the standard tools they already had to process the images and parts that passed/failed. The partner effectively processes the images as 2D, using the height data instead of brightness data.

The robot presents each part to the scanner. Each image takes  less than 1 second to take and then the robot moves to the next part. Eight parts are made every 20 – 30 seconds. If the part fails, the robot removes it. The good parts are placed onto a cooling conveyor.

The process was very stop-start – mainly because the robot did not hold the product steadily enough and this affected the scan. There were also several large gaps in time when waiting for improvements to stiffen/dampen/brace the robot head to keep it still.

The PhoXi 3D Scanner was able to provide images of a much higher quality than those offered by the competition.

The main benefit is a reduction in the amount of faulty parts that get to the customer, even though the parts are manually handled later in the process – the operator did not always spot a fault so this system identified faulty parts reaching the assembly stage which stopped them reaching the end customer. This is important for functional reasons (they don’t want the pipe/joint to leak) but also reputational ones for Brett Martin who maintained their status as a provider of quality parts.

In addition, the inspection keeps up with the existing process and fills in the “dead” cycle time so the additional inspection did not slow down the production process nor did it take up any additional floor space as it was able to fit within the existing cell’s guarding.

Automated assembling of spikes on shoes

Automated picking and placement of apples

Partner: Robovision   Problem: Robotic picking of organic materials such as fruit is a challenging…

Partner: Faculty of Electrical Engineering and Information Technology, the Slovak University of Technology in Bratislava…