The customer is a company that designs, manufactures, maintains and optimises liquid filling systems for large-format containers.

The main challenge for the customer was to solve issues that arose when using 2D vision. Another challenge was standardisation of the solution for the advanced series of the filling machines.

A new solution was needed that would improve the production, quality of the filling systems and the customers’ satisfaction.

The solution was a fully automated machine for weighting and filling of drums, cans, barrels and IBCs on pallets in a production line. The Photoneo system scans the surface of the containers and creates a 3D model in the point cloud. This allows us to know the exact position of the bunghole, its height and the degree of horizontal inclination. Thanks to the robot-scanner calibration, the robot knows the exact position of the bunghole in X,Y,Z and can perform the required job. The application is in an anti-explosion environment. 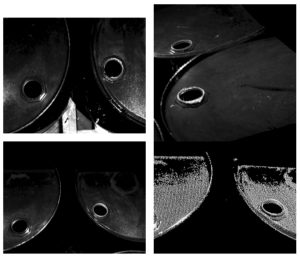 After a successful testing phase, the solution became standardised. The Advanced Machine Series are now being sold together with the PhoXi 3D Scanner.

Before, the systems employing artificial 2D vision required the containers to be placed onto an exact position on the pallet and that the upper part of these was perfectly horizontal. Even a small degree of inclination caused errors in the calculation of the position of the curbs. The errors were proportional to the imperfection of the containers. 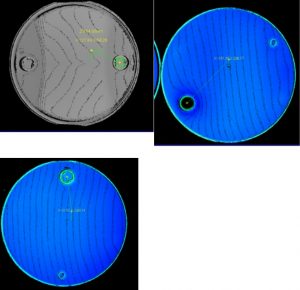 With the new 3D technology, this optical effect is minimised and the level of the machine efficiency, mainly in plastic containers (which suffer the greatest deformations in the manufacturing process) increases considerably, allowing to shorten the filling time by half. The improved accuracy of the calculation of the of the bungholes positions leads to a greater reliability of the process, which minimizes a machine stop due to bad alignments between the bunghole and the machine.

The implementation of PhoXi 3D Scanner in this application led to the reduction of production costs, increased productivity of the filling processes and meeting the highest safety and quality standards.

Partner: Kuźnia Polska   Problem: Robotization is one of the key areas of investment in…